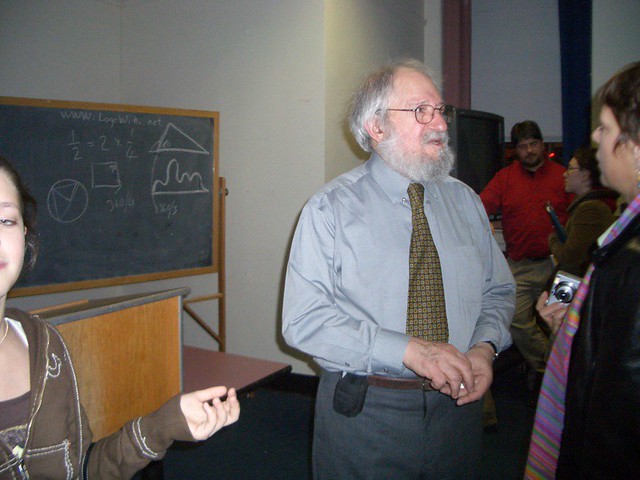 Seymour Papert , the inventor of Logo, spoke at Teachers College on Monday April 10th. I was lucky enough to hear him talk in a standing-room-only event. My former employer, Idit Caperton
studied with Papert, and MaMaMedia incorporated many of the principles he advocated.

His ideas, once stated, are remarkably simple and obvious–usually a mark of the good ones. He thinks we are teaching mathematics ass-backwards, and that we ought to introduce it the way it came about in the history of humanity – engineering first. This approach will create and foster the demand for mathematics. Pyramids, navigation, astronomy, all drove the development of mathematics – and robotics and programming can provoke and instigate the need for mathematical abstraction in education. Sounds about right.

Interestingly, his experiments have led to anecdotal accounts of a reversal of the gender discrepancy in science/math. He claims with an engineering first approach, girls actually quickly excel beyond the boys, venturing beyond speed and destruction to the mastery of a much wider variety of skills with the systems.

He also demonstrated, in 10 minutes flat, how logo can be used to teach 2nd graders the notion of a mathematical theorem (in creating any closed shape, the turtle will rotate through a full 360 degrees – repeat N {fd 10 rt 360/N}) as well as how to introduce calculus (through the idea of the limit). He made the point that once a second grader is arguing — “that’s not a circle, its lots and lots of short lines”, you have already won…

If logo has a failing, its that it does not provide the necessary scaffolding for teachers other than Papert to effectively teach with it. I have been exposed to logo in the past, but never really understood its appeal until Seymour started turtling.

Interestingly, Logo is far from irrelevant. Mark Shuttleworth’s ClassroomCoders curriculum imagines a logo->squeak->python pipeline for educating the programmers of the future…

Seymour is also heavily involved in the $100 laptop project, a project which many consider to be one of the most important educational initiatives currently underway.

Filed by jonah at 11:35 pm under epistemology,water

One Response to “Turtle Totems”